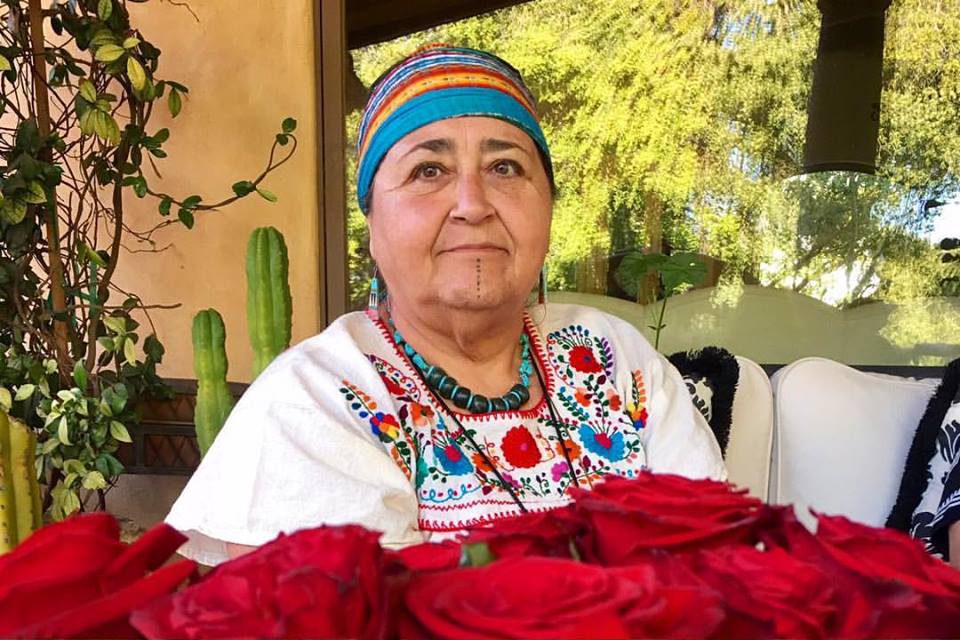 We have known and been a part Hua Anwa’s life for many years. She is the Clan Mother of the Long Dance on the Central Coast of California and is the Spiritual Leader of Circles of Empowerment.  We regularly attend ceremonies with them. Here is a bit about her and the community she leads.

Clan Mother Hua Anwa is a Metis Elder, a teacher of mixed Mayan and Cherokee descent and an adopted Chumash who leads ceremony on the Central Coast of California and is the spiritual leader of Circles of Empowerment.

The primary ceremonial offering in this community is an annual, traditional Long Dance. Falling on the autumnal equinox each year, the Long Dance event gathers over one hundred woman into a great community circle of drumming, singing, sweat lodge and teaching that culminates in an all night ceremony lasting from sunset to sunrise. Brothers are invited to hold space for this ceremony with distinct ceremonial activities of their own. Held on remote, private land, both men and women participate in the village building and the communal creation of sacred space that makes possible this highpoint of the spiritual calendar. It is a mighty undertaking, requiring weeks and months of advance planning, organization, and the gathering together of materials, resources and various community partners.

In addition to the Long Dance and Full Moon circle which she leads in Arroyo Grande, Hua also offers classes, teachings, services and counseling to a wide variety of audiences, individuals and her extended community. See her offerings page for more information on the types of healings, ceremonies and teachings she can make available for you.

Local press has recognized Hua Anwa with these articles in the San Luis Obsipo Tribune, written by Gayle Cuddy, and another article in the Women’s Press, written by Tobey Crockett.

In the past few years in particular, Hua has traveled throughout the western United States and Central America as an honored guest speaker and Elder. Locally, Hua has been featured as a guest speaker, including the Cambria 350 event to encourage awareness of carbon issues and global warming in October, the Hopedance film screening of the 13 Grandmothers movie in San Luis Obispo September 2010. Hua is an impassioned speaker on our sacred relationship and responsibility to honoring the water. Hua has undertaken both a water-pilgrimage, to pray with the major bodies of water along the western United States, and has attended municipal and town-hall meetings to speak on the practice of hydrologic fracturing (fracking) from the Native American perspective.
In 2012 Hua made the pilgrimage in recognition of the Mayan prophecy for the new Age of Honey, as an honored guest of Mayan spiritual leader Tata OmeAkaEhekatl Erick Gonzalez, and again in 2014 Hua returned to sit in council with him among his community in Patziapa, Guatemala.
Listen to Hua’s reflections on her trip to Guatemala during the famed 2012 Winter Solstice. This profound ceremonial occasion marks the end of the Mayan calendar and the start of a new Age of Honey. Download her talk here.
Feel free to contact Hua either by email or call her at 805 481 0892 with any questions.

About Circles of Empowerment

Based on the Central Coast of California, Circles of Empowerment is situated at the Western Gate of this Turtle Island. They are a community of more than 800 members who engage in and connect through ceremonial gatherings, events, teachings and meetings. Circles of Empowerment embraces a Native American inspired Medicine Way. Through these teachings of the Original Instructions, they encourage a spiritual connection with the Earth Mother in an authentic, unique, and indigenous way. We do this in support of one another and for the benefit of global healing.

Those who wish to enter training may do so under the guidance of the organization’s Spiritual Lead and founder, Hua Anwa, as well as through the teachings of our beloved Elders and Wisdomkeepers. Passing tobacco and making requests honors our teachers and promotes legacy. This type of training is not available in a classroom and can only be learned via direct oral transmission.

Circles of Empowerment is the name of our recognized 501(c)3 organization, which operates under the umbrella of the Church of Empowerment, a non-denominational, non-profit entity.

Founded in 1990, Circles of Empowerment formed as a way to better support the growing need for ceremony in the community and to support the founders. As our ceremonial population grew, it was clear that we wanted to organize our efforts.

As an organization whose mission it is to promote a Native American inspired Medicine Way, including ceremonies as our primary offering, we are run entirely by volunteers who are passionate about being in service.

The volunteers who administer our daily operations as well as our public events have been called to service and are available to you to talk about the different ways in which you could become more involved yourself, as an organizer, in ceremony, and in support of the teachings we offer.

Community members are invited to consider reciprocity to the community through volunteering in these ways.